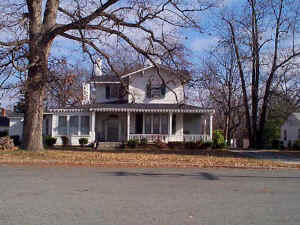 Stagg House
"The Stagg House is important both for its architecture as well as its historical associations. This intact (though added to) dwelling is Burlington’s only surviving example of the city’s two extant antebellum residences with direct ties to the North Carolina Railroad Company (NCRR), only the Stagg House retains its original character. The fancifully embellished house is associated first with Cyrus P. Mendenhall and the Francis Asbury Stagg, two secretary-treasurers of the NCRR who also gained prominence outside of Company Shops, later Burlington. Subsequent owners included a textile manufacturer, a grocer and a pharmacist, all well known local businessmen."

"The Stagg House is a frame, T-shaped two-story dwelling with a large wraparound porch. Numerous one-story wings appear to have been built in the late nineteenth century, after the original construction between 1857 and 1859. Most, if not all, of the original decoration survives. In combination with the asymmetrical configuration of the house, this fanciful turned and sawn mill work decoration renders the Stagg House a fine example of the picturesque bracketed cottage."