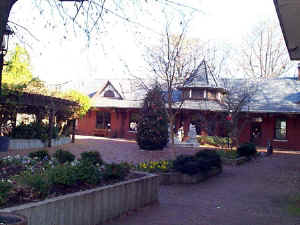 Southern Railway Depot
"The Burlington Passenger Depot, constructed by the North Carolina Railroad Company in 1892, is typical of stations built by the railroads during the ‘Golden Age’. Hundreds once lined the tracks, but urban growth has reduced the number to a precious few. Remaining passenger depots stand as testimony to the socioeconomic revolution ushered in during the railroad age. The Victorian Tudor Burlington Depot, with its hipped roof, octagonal tower, and triangular dormers, shares that symbolism; but even more significantly, it stands as a local monument to the city’s origins as a railroad town."

"The vaguely Tudor Burlington Depot is a rectangular building, approximately 38 feet wide and 126 feet long…except for the addition of a wraparound roof overhang built between 1904 and 1908, it is virtually unchanged since it was erected in the early 1890s."