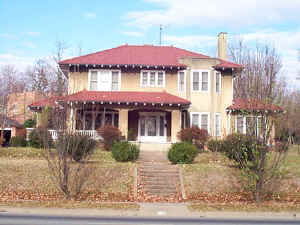 Charles Horner House
"The Charles Horner House and Earl Horner House, built side by side on a single large tract, are apt reflections in their respective period revival and bungalow styling of personal achievements that epitomized Burlington’s great strides between the 1910s and 1930. The Charles Horner House is Burlington’s only example of Spanish Colonial Revival style…. These houses complement and enhance each other by their placement on a terraced tract. More importantly, the two brothers for whom they were built were leaders of Burlington during its most progressive period, in addition to operating a successful manufacturing company. Charles Horner was an active member of the Burlington School Board from 1923 to 1937…."

"At all rooflines, the deep eaves with dozens of exposed rafter ends, often bungalow features, here take on somewhat exotic flavor in combination with the more distinctly Spanish stuccoed walls and red terra cotta tile on the roof…the Charles Horner house also is characterized by a plethora of windows—sixty-six in all."