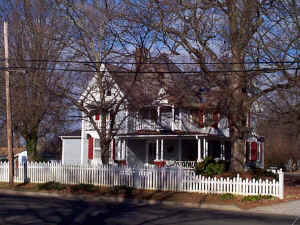 Holt-Frost House
"The Holt-Frost House is one of the few full-blown Queen Anne style houses remaining in Burlington. The house achieved its present appearance when it was acquired by Nancy Moore Holt who, with her husband, constructed the main, two-story block of the house and apparently remodeled the rear one-story wing. Evidence suggests that this rear wing may be at least a portion of the house Mrs. Holt’s father, Dr. John A. Moore, built on this site shortly after his settlement at Company Shops around 1855, and as such would be one of the city’s very few surviving antebellum structures. Except for some minor alterations, the house is intact, displaying its profusion of turned and sawn embellishment that renders it the richest example of its style in the city."

"The most significant element of the Holt-Frost House is its elaborate display of ornament executed in slate, glass and wood. The roof is covered in slate laid with regularly spaces bands of three rows of scalloped tiles. The upper sashes of the pairs of attic windows in each of the gables are filled with numerous small panes of multi-colored glass."