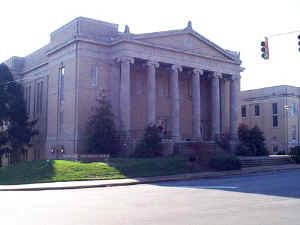 First Baptist Church
"The First Baptist Church is one of Burlington’s two outstanding examples of Neoclassical Revival style church architecture. Standing on the southeast perimeter of the city’s Central Business District, the building was erected in 1922-24 by one of Burlington’s leading congregations whose growth paralleled the prosperity that was being experienced throughout the community. The First Baptist Church is a prime example of early twentieth century use of ancient Greek forms in the reserved and stately treatment of the Ionic hexastyle temple front."

"The building presents an impressive monumental facade that dominated the prominent intersection of Broad and East Davis Street…. The Neoclassical Revival styling is manifested most forcefully in the main facade dominated by a monumental temple front. The Ionic hexastyle portico displays the architect’s [Herbert Hunter] understanding of classical Greek architecture in its correct, though austere, use of elements."