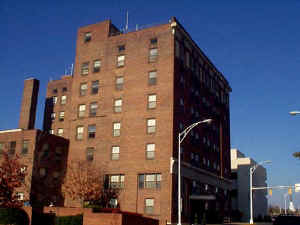 "The last in a series of hotels to operate in the central business district, the Alamance Hotel in Burlington, North Carolina symbolizes a traditional concern on the part of public-minded citizens who, from the mid-nineteenth century onward, recognized the financial benefits for the whole community of good hostelries. It also is a highly visible symbol of the growth and prosperity of the 1920s in the United States, the South, and the particular community. It reflects a substantial and well-publicized building program and the city's drive for industrial and economic development that culminated in the giant Burlington Industries. The hotel was designed by Charles C. Hartmann, a noted architect who practiced in North Carolina for more than forty years, from the 1920s to the 1960s. A native of New York, he was responsible for many significant structures in Greensboro, North Carolina in the twentieth century, including the Jefferson Standard Life Insurance Company Building. When the Alamance Hotel closed in 1974, an era in Burlington's history ended which can never be recaptured...."