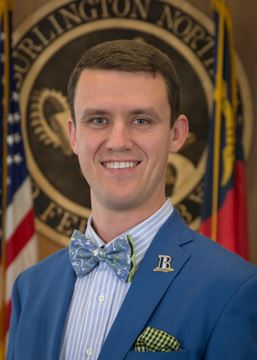 Mayor Ian Baltutis, elected in 2015 and re-elected in 2017 and 2019, is a 2008 Business Entrepreneurship graduate of Elon University. He works as an inventor and entrepreneur focusing on manufacturing, logistics, product design, as well as downtown and community revitalization.

Mayor Baltutis manages global operations for The Vibration Solution, LLC, an American product design, and manufacturing company that he founded during his studies at Elon University. Baltutis is a strong supporter of American manufacturing. He founded his company around the idea of creating a company that is lean, efficient, and nimble. His foresight and leadership have allowed the company to reach and support numerous innovative niche markets that other companies cannot serve.

He is a passionate supporter of Downtown Burlington where he helped found Burlington Beer Works Co-op Brewery and Restaurant. He currently owns Persnickety Books, a bookstore committed to reducing recidivism by, "Giving Books and People a Second Chance."

Baltutis is an Eagle Scout who believes in always giving back to his community through service, leadership, and philanthropy. In his free time, he loves helping elementary students learn about municipal government, volunteering with Elon University students and alumni, advising start-up entrepreneurs, and mentoring youth through the local Boy Scout Venture program.

He loves the open road and exploring the United States on our nation’s backroads and historic highways. Baltutis enjoys tinkering in the garage. He recently completed a 16-year project to restore a 1974 1/2 MGB GT Pepsi Pace Car that he found in a barn in Minnesota. Mayor Baltutis is also an advocate for historic preservation and is restoring the former Southern Music Studio house in the West Davis Street historic district.

His other hobbies include woodworking for which he has won awards at the Heritage Craft Festival in Alamance County and the NC State Fair. As an avid runner and cyclist, he can often be spotted pounding the pavement and trails all around Burlington and Alamance County.

I became Mayor because I love our community and I believe that we can achieve the shared vision for our city more effectively when we work together. No one understands your community better than you do. Please reach out to share your perspective with me. To schedule a meeting with me or request my attendance at an event, please contact our City Administrative Staff at 336-222-5020.

As the youngest Mayor in Burlington’s history, I am particularly passionate about working with youth members of our community to help them find opportunities for civic engagement. I believe that leadership can develop at any age and that having positive mentors and champions is a crucial part of the process. To invite me to your classroom, youth group or to discuss issues relevant to you, please contact our City Administrative Staff at 336-222-5020.

Each month residents are invited to participate in our Mayor’s Book Club program. Books are available for checkout from the Alamance County Public Libraries. I host discussions of each reading at noon on the first Wednesday of the month. Meet new people, get inspired and put your ideas into action at the Mayor’s Book Club. Learn more about the book club's current activities here.