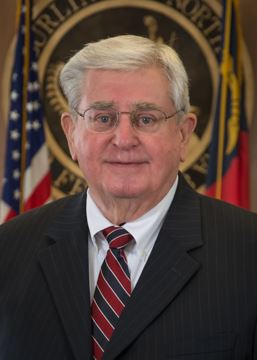 Councilman Bob Ward was elected to serve on the Burlington City Council in November of 2011 after his retirement from 39 years of service as Burlington's City Attorney. He was to another four-year term on the City Council in 2015.

Ward was born and raised in Burlington and graduated from Walter Williams High School before attending the University of North Carolina at Chapel Hill, where he graduated Phi Beta Kappa with a Bachelor of Arts in Political Science in 1967. Ward then went on to complete his Juris Doctor Degree at UNC-Chapel Hill in 1970. Ward has since earned a Masters in Public Administration from UNC-Chapel Hill, and a Doctorate of Education from North Carolina State University, where he was inducted into the Phi Kappa Phi Honor Society.

In addition to his career as a City Attorney, Ward has held numerous adjunct faculty appointments in the Department of Adult and Community College Education at North Carolina State University, the Departments of Political Science at both the University of North Carolina at Greensboro and Chapel Hill, at the Institute of Government (now the School of Government) at UNC-Chapel Hill, and at the North Carolina Central University School of Law. Since retiring from the City Attorney's position, Ward engages in the private practice of law in Burlington.

Ward has been married for 52 years to wife Doris Moore Ward with whom he has raised two daughters, Michelle Ward Taylor and Valerie Ward.

Councilman Ward is dedicated to open, ethical, and efficient government for all citizens of Burlington. His pledge is to protect and preserve the rights of Burlington's citizens while working to ensure that tax dollars are spent wisely, promoting sound economic growth and job creation.