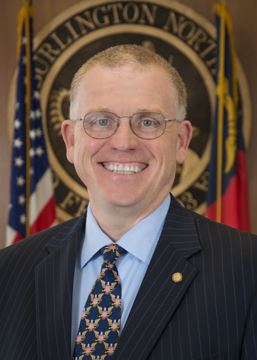 Hardin Watkins, a native of Hendersonville, North Carolina, has held the office of Burlington City Manager since January 2016.  Mr. Watkins holds a Bachelor of Arts in Public Policy Analysis, with a specialization in State and Local Administration and a Masters of Public Administration, both from the University of North Carolina at Chapel Hill.
Before coming to the City of Burlington, Mr. Watkins served as the Town Manager of Garner, NC. Prior to his employment with the Town of Garner, Mr. Watkins served for 9.5 years as the city manager of the City of Suwanee, Georgia.  Suwanee was the fastest growing city in Metro Atlanta during this time period.  Prior to that, he served for 5.5 years as to the city manager of the City of Decatur, Georgia and 2.5 years as city planner & community development coordinator for the City of Bennettsville, South Carolina.

Mr. Watkins is an International City/County Management Association (ICMA) credentialed city manager as well as an active member of ICMA.  He is a member of the North Carolina City-County Management Association and recently served as Chair of the City of Raleigh Watershed Protection Task Force.  Other recent professional affiliations include serving on the City of Raleigh Utility Advisory Committee, the Raleigh Chamber of Commerce Regional Transportation Alliance Ad Hoc Committee on 540/Triangle Expressway Development, and the North Carolina League of Municipalities’ Legislative Action Committee on General Government.